Apart from the most widespread compressor cooling, the market is beginning to see more and more units for direct and indirect evaporative cooling (adiabatic, evaporative). Evaporative cooling has a long history. In ancient times, moistened clothes were used to reduce room temperature. Environmental aspects weigh in favour of evaporative cooling since water (R718) is used as a coolant. In Polish literature, one can find statements that this method of cooling of air is suitable for dry and hot climate [1]. This article analyses the efficacy and cost-effectiveness of using direct evaporative cooling in Polish conditions.

The operational principle and the design of a direct evaporative cooling unit is illustrated in Fig.

Fig. 1. Operational principle and the inside of a direct evaporative cooling unit – own work based on [2]

In terms of thermodynamics, evaporative cooling involves heat and mass exchange between water and flowing air, during which water evaporates. The heat needed to evaporate the water is received from the flowing air so that its temperature is reduced and moisture content increased. Sensible heat from the air is converted to latent heat of evaporated water. The whole evaporation process takes place virtually without heat exchange with the environment, so the total cooling power of the unit is… 0.0 kW. However, the air leaving the unit has a temperature lower than the intake air by a dozen or so Celsius degrees. To describe the effect of direct evaporative cooling, the term „sensible cooling power” is sometimes used:

Given the fact that reducing air temperature during evaporative cooling involves increasing the relative humidity, performance of these devices clearly falls in the case of high relative humidity, which can happen in the summer before the storm, for example.

To assess the suitability of evaporative cooling in the Polish climate, we conducted two-month measurements of operating parameters of Breeze 900 unit operating at approx. 75% of the nominal airflow. The unit was used to lower the air temperature in a warehouse of approx. 400 m2, located on the outskirts of Poznan (Fig. 2).

Fig. 2. Location of the test unit – source: own work

The unit operating with a yield of approx. 10,000 m3/h was monitored for two months in the summer of 2013. The measurements results were used to calculate the energy based on hourly meteorological data published by the Ministry of Infrastructure and Development [3].

These parameters were measured continuously with high accuracy, averaged and recorded every 2 minutes. Also the unit switch-on time was monitored. The unit worked from Monday to Friday, between approx. 8:30 am to approx. 4:30 p.m., and only when its operation was needed due to the temperature of the air in the warehouse. 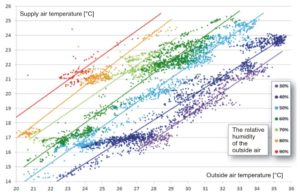 Fig. 4. Relationship between supply air temperature and the temperature and relative humidity of the outside air; Breeze 900 operating at approx. 75% of the nominal airflow – source: own work

Figure 5 illustrates the parameters measured during two consecutive hot and sunny days (July 21 and 22, 2013); during the first day the unit was turned off (Sunday), while during the next day (Monday) it was working. By combining two similar days, the graph allows for a comparative assessment of the unit’s effect.

Measured electric power consumed by the unit was 680 W. 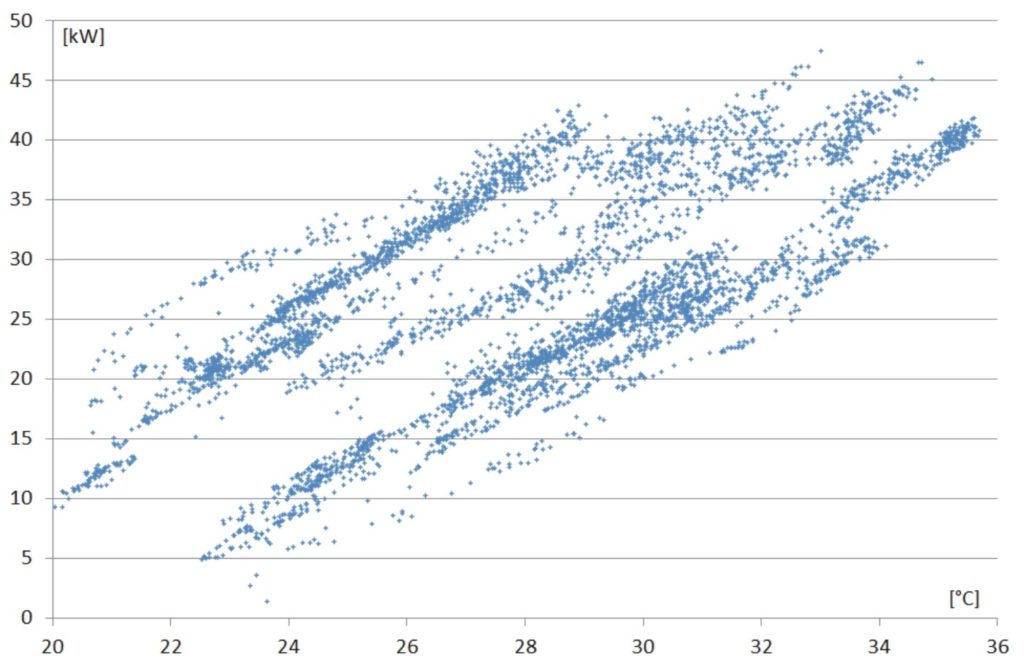 Fig. 6. Relationship between sensible cooling power and the outside air temperature
– results of measurements, constant flow of air – source: own work

The measurement data collected in the specific place and time allow you to define the operating characteristics of the used unit for the existing external conditions. However, in order to assess the expected average effectiveness and seasonal costs of unit operation, one must convert the unit performance data, obtained during measurements, to standard conditions. For this purpose the collected data illustrated in part in Fig. 4 were approximated by using the function and, where is the outside air temperature, – outside air relative humidity, is the supply air temperature, and – supply air relative humidity. Using these dependencies and data from „Typical meteorological summers” published on the website of the Ministry of Infrastructure and Development [3], we calculated the distributions of the supply air temperature and relative humidity for 4 sample locations: Szczecin, Poznan, Warsaw, Katowice. In each case we assumed that the unit would run from June 1 to August 31, 7 days a week during time of day when the outside air temperature exceeded + 22°C. For the calculation of operating costs we assumed price of 1 kWh of electricity equal to EUR 0.15, and the price of 1 m3 of water equal to EUR 2.75. We assumed air volume lower than the nominal value, corresponding to the value used during unit testing.

The calculation results are summarized in Table 1.

Table 1. Seasonal parameters of the unit under test, calculated for typical meteorological summers for 4 locations in Poland – source: own work

Analysis of the calculations results leads to following conclusions:

Excellent energy efficiency results and completely environment-friendly operation are undeniable advantages of direct evaporative cooling units. These units, however, are characterized by certain features that may raise doubts for designers and potential users. These include:

Adding 30–40 dm3/h of water to the supply air sometimes raises concerns about uncontrolled growth of humidity in the room. These concerns would be fully justified if the unit was operated with circulation air – as in the case of split compressor coolers. However, adding 35 dm3/h of water into the 10 000 m3/h stream of fresh air increases moisture content in the air by less than 3 g/kg, which raises relative humidity by approx. 15% at the temperature of 25°C that is typically found in air-conditioned rooms in summer days. The measurement results show that the relative humidity of the air in the supported room does not exceed 60% with the unit running on a hot day (compare Fig. 5), which is consistent with the calculations results: parameters of the supply air = +18°C, = 90%, after absorbing sensible heat gains in the room, at temperature = +25°C achieves relative humidity of = approx. 60%. It may happen, however, that the relative humidity of the outside air in the afternoon hours will exceed 70%. In this case, the relative humidity in the air-conditioned space is also likely to exceed 70%, since evaporative cooling units cannot dry air (as opposed to compressor coolers). The relative humidity comfort for occupied areas ranges from approx. 30% to approx. 70%; when using evaporative cooling units for factories, warehouses, etc., one should check acceptable range of relative humidity in a particular case.

In terms of the pathogens associated with cooling and air-conditioning devices, the most serious threat is posed by the strain of Legionella pneumophila. These bacteria are found in small quantities in the environment (eg. rivers, lakes), they reproduce in water at a temperature from 20°C to 45°C with varying intensity – the fastest growth is at + 37°C. The virulence of Legionella pneumophila also depends on the temperature – the bacteria are more aggressive at approx. 37°C than at a temperature below + 25°C [4]. Infection is possible by inhalation of sprayed droplets of water containing the bacteria. Water in liquid form comes into with contact the supply air in most popular systems used for cooling, humidification or dehumidification, and to some extent all of these systems should be protected against growth of Legionella. The more detailed requirements in this respect can be found in the Report of the Building Research Institute [5]. For air-conditioning / air-cooling, the greatest risk of Legionella pneumophila occurs when using spray cooling towers and evaporative condensers because these have higher temperatures that promote rapid growth of bacteria. For evaporative (adiabatic) cooling as part of the supply air treatment, the risk of bacterial proliferation occurs in the event of stagnation in the water tank during intermittent operation [4]. To remedy this, the water tank should be completely drained when the unit is not working. Modern unit for adiabatic cooling are provided with electromagnetic valves that automatically drain the tank. In the tested unit, average temperature of the supply air was +20.2°C, while in typical weather conditions, average supply temperature of approx. + 18°C should be expected (Table 1). Instantaneous temperatures of the air leaving the unit can therefore reach values up to approx. + 25 C. Due to the fact that the unit is being continuously supplied with cold mains water, the average temperature is lower than the temperature of the supply air. Also, the water tank in the tested unit is relatively small – smaller than the average hourly water demand, and therefore the water holding time in the unit usually does not exceed 1 hour. Thus, during evaporative cooling unit operation, the risk of Legionella proliferation is negligible. This risk arises if the water is left in the tank when the unit is not working, as in this case, the water temperature can reach (or exceed) the outside air temperature, eg. above + 30°C. To avoid this, make sure you drain water from the unit’s tank when finishing operation.

Evaporative cooling (adiabatic, evaporative cooling) is an interesting alternative to compressor cooling that is dominant one the market. Ten times higher energy efficiency and no negative impact on the environment (as mains water acts as the coolant) are key advantages of this system. When deciding to use evaporative cooling, one should, however, take into account that in periods of high outside air humidity – which happens before the storm for example – the unit’s sensible cooling power will be noticeably smaller. Furthermore, you can expect a bit higher relative humidity in the rooms being cooled. This value depends on many factors and mostly does not exceed 5565%, which is acceptable for human thermal comfort. When the unit is operated correctly, risk of Legionella pneumophila growth is minimal or non-existent, as in other air-conditioning devices.

The use of evaporative cooling units of the design considered has one very important advantage, not mentioned before: in contrast to split cooling systems, evaporative cooling delivers into the building a huge amount of fresh, filtered air. The unit described in this article supplies to the building 10 000 m3/h of cooled outside air, which covers the fresh air demand for more than 300 people, at a total cost of ownership not exceeding 0,25 EUR/h. In relation to buildings cooled by compressor units there will be another difference: in a building with an evaporative cooling system, you need to put up signs… „Please do not close windows”.

[3] Website
http://www.mir.gov.pl/budownictwo/rynek_budowlany_i_technika/efektywnosc_energetyczna_budynkow/typowe_lata_meteorologiczne/strony/start.aspx – Typical summer weather and statistical climate data for the Polish territory for the calculation of building energy, accessed on 13/06/2014

[5] Kozłowski B., Toczyłowska B., Pykacz S., 2011, Guidelines for the design, construction and operation of water supply systems and air conditioning systems to reduce the risk of Legionella, published by Building Research Institute, Warsaw,